This site uses cookies to store information on your computer.

Some of these cookies are essential, while others help us to improve your experience by providing insights into how the site is being used.

Sunderland has made its proclamation for King Charles III. 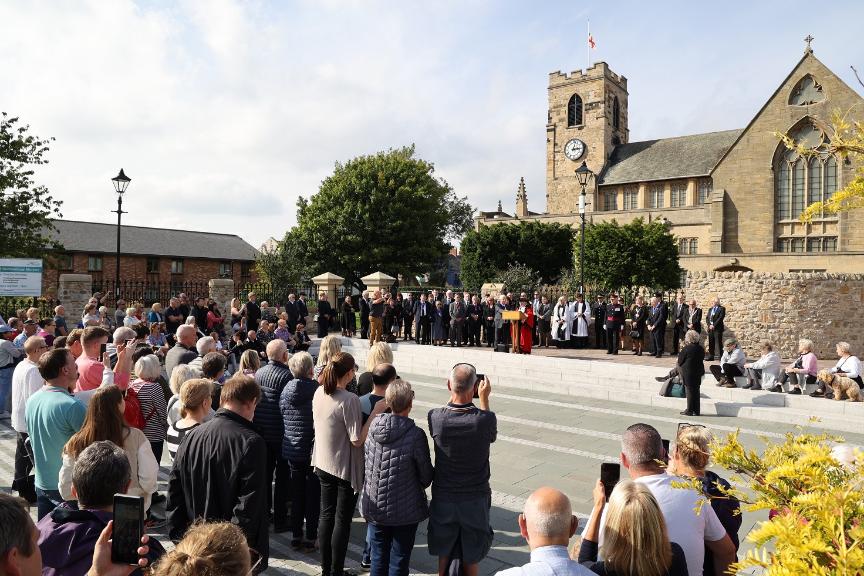 The city has joined other cities and towns across the country making its own proclamation following the ceremony at St James's Palace in London on Saturday 10 September.

Local proclamations are a historic tradition informing residents of a new monarch and date back to before the age of mass media.

Sunderland's proclamation was made shortly after 3pm in Minster Park by the Mayor of Sunderland, Councillor Alison Smith.

Members of the public joined civic and faith leaders, MPs, senior officers from the emergency services, freemen and Aldermen, and representatives from military units affiliated to Sunderland.

His Majesty was represented by the Deputy Lieutenant of Tyne and Wear Dr Norman Taylor. Following prayers for Elizabeth II and the new King, Cllr Smith was presented with the proclamation letter by Dr Taylor.

It stated: 'Whereas it has pleased Almighty God to call to His Mercy our late Sovereign Lady Queen Elizabeth the Second of Blessed and Glorious Memory, by whose Decease the Crown of the United Kingdom of Great Britain and Northern Ireland is solely and rightfully come to The Prince Charles Philip Arthur George: We, therefore, the Lords Spiritual and Temporal of this Realm and Members of the House of Commons, together with other members of Her late Majesty's Privy Council and representatives of the Realms and Territories, Aldermen and Citizens of London, and others, do now hereby with one voice and Consent of Tongue and Heart publish and proclaim that The Prince Charles Philip Arthur George is now, by the Death of our late Sovereign of Happy Memory, become our only lawful and rightful Liege Lord Charles the Third, by the Grace of God of the United Kingdom of Great Britain and Northern Ireland and of His other Realms and Territories, King, Head of the Commonwealth, Defender of the Faith, to whom we do acknowledge all Faith and Obedience with humble Affection; beseeching God by whom Kings and Queens do reign to bless His Majesty with long and happy years to reign over us.

'Given at St. James's Palace this tenth day of September in the year of Our Lord twenty thousand and twenty-two.

'GOD SAVE THE KING'.

The proclamation ceremony finished with three cheers for King Charles and the National Anthem.

Proclamations have been made across the region following the ceremony in London.

After being raised to mark the proclamation, the Union Flag at City Hall now returns to half-mast.

Residents are invited to make their own public tributes through the city's Books of Condolence or with flowers.

More details are here: People invited to pay tribute to Her Majesty The Queen as city opens Books of Condolence - Sunderland City Council