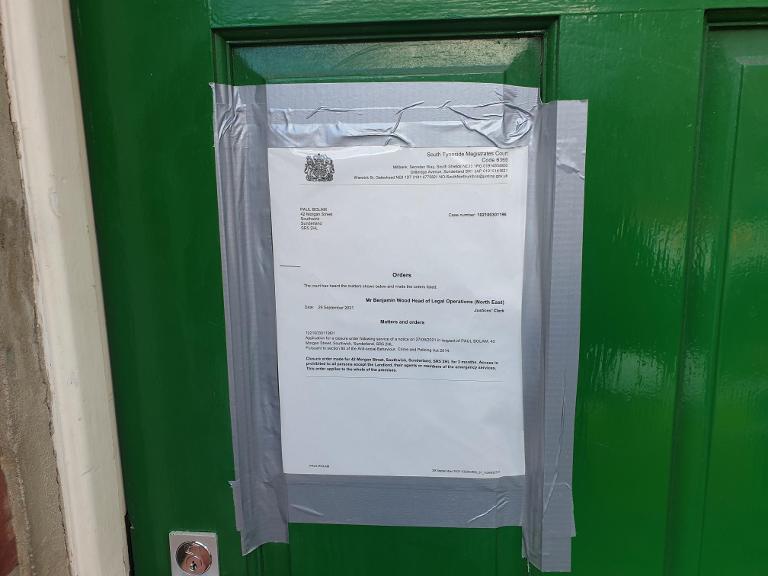 This brings to six the number of closure orders Sunderland City Council has secured on problem properties across the city in the last six months, with the support of Northumbria Police.

The closure order against an unregistered four room HMO property at 42 Morgan Street, Southwick, was supported by Northumbria Police and granted by South Tyneside Magistrates' Court on Wednesday 29 September. The application for the Order was made following complaints from residents that the property was being used as an open house for drug-use and anti-social behaviour

The court heard that the house was occupied by Paul Bolam, who treated the address as an open house for drug users,  even leaving a window open for associates to climb inside in his absence.

Things deteriorated rapidly in the 18 months after Mr Bolam moved into the quiet residential street in March 2020, with three City Council led ASB investigations and more than 60 police incidents at the address. This led to residents working with the Council's ASB Team and Police to bring the closure order.

The order will initially remain in effect for three months, prohibiting anyone from remaining on or entering the premises, with a maximum penalty of 51 weeks imprisonment for anyone breaching this. The City Council is also pursuing a Criminal Behaviour Order against Paul Bolam in a bid to curb his anti-social behaviour and ensure the issues at Morgan Street do not occur elsewhere.

The City Council has also issued the landlord of the property with a Community Protection Warning with 13 separate conditions that need to be met to avoid further enforcement action. This comes after visits to the property found a strong smell of cannabis and waste,  including food waste and gas canisters piled high in the rear yard, and the communal kitchen infested with flies.

A partial closure order was also obtained against a private rented property at 77 Rhodesia Road, Redhouse was granted by South Tyneside Magistrates' Court on Tuesday 28 September and was again supported by Northumbria Police.

The order will initially remain in effect for three months  prohibiting anyone other than Paul Sawyers and his son from remaining on or entering the premises, with a maximum penalty of 51 weeks imprisonment for anyone breaching this. The City Council is also pursuing a Criminal Behaviour Order against Paul Sawyers in a bid to curb his anti-social behaviour and ensure the issues at Rhodesia Road do not continue elsewhere.

This application was made following complaints from residents relating to excessive noise, fighting and drunken behaviour. The complaints were substantiated by witness statements, noise recordings obtained via the Council's noise monitoring application and Northumbria Police records, outlining Police 18 incidents since the occupant Paul Sawyers moved into the property 18 months ago.

The court heard that the premises had been used by Paul Sawyers and his visitors for regular gathering involving excessive alcohol consumption, resulting in violent disorder and noise disturbances through the night and into the early hours of the next morning.

Councillor Claire Rowntree, Deputy Leader of Sunderland City Council, said: "We hope the closure notices will give some much needed respite to the residents of Morgan Street and Rhodesia Road, many of whom have lived in the streets for a number of years. No-one should have to tolerate the kind of anti-social behaviour these residents have had to put up with over the last 18 months.

"This kind of behaviour is something that both the City Council and Northumbria Police take very seriously. I'm delighted that we have been able to work closely with residents to tackle these blights on their communities and I'd like to thank them for everything they have done to help bring this case to court."

Inspector Steve Prested, of Northumbria Police, said: "Nobody should have to put up with this kind of anti-social behaviour, so we are delighted with these outcomes that have been achieved by working closely with the council. Where it is appropriate, we will pursue criminal prosecutions against individuals but there are also other tactics we can use to respond to concerns from residents in our communities.

"Those living in these properties have made life a misery for residents, so I hope this positive action offers them some reassurance and shows we will take action against those who undermine the fabric of our communities. We would not have been able to achieve this outcome without the support of the public, so this shows the value in reporting concerns to us."