A Schools Triathlon has kicked off the 50 day countdown to Sunderland hosting the 2022 British Triathlon Super Series Grand Final in August. 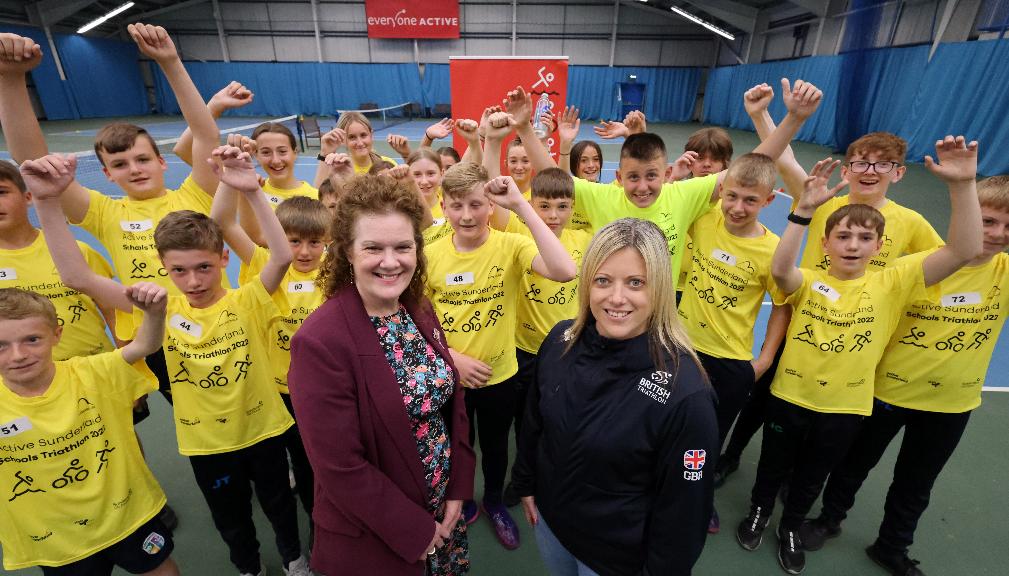 Competitors from each eight-strong team took part in a timed swim, bike and run, ahead of trophies and medals being presented to the winning schools and individuals by the Mayor of Sunderland, Councillor Allison Smith.

I hope that this and other major sporting events like the Tour of Britain on 6 September, will inspire more people to take up and enjoy swimming, cycling and running and join in with our swim, bike run programme. So it's wonderful to see so many youngsters signing up for this event.

"And who knows - some of the brilliant young people taking part in the Schools Triathlon could well go on to be the stars of the Super Series Grand Final in the future."

Iain Williamson is Head teacher at Dame Dorothy Primary School in Monkwearmouth, one of the schools taking part in the schools triathlon.

He said: "Dame Dorothy Primary School are delighted to be taking part in the Sunderland Schools Triathlon.  We have fitness, health and daily activity at the heart of our school ethos, and this is a wonderful opportunity to engage our young people in an exciting new event that will hopefully inspire them to participate in events in the years ahead. The children have been so excited to be competing and couldn't wait to have a go."

The Active Sunderland Schools Triathlon is being run in partnership with British Triathlon, the organisers of the Super Series Grand Final.

Helen Marney, Director of Development at British Triathlon, said: "It's fantastic to see so many young people getting involved and enjoying swim, bike, run especially as we continue the countdown to the British Triathlon Super Series Grand Final.

"The schools triathlon is a great component of the swim, bike, run offer in Sunderland, enabling children of all ages and abilities and their schools to get involved. The offer continues within the Super Series Grand Final in August where there will be a swim-run event specifically for families and an adult swim, bike, run aimed at individuals who want to try something new or are just starting out in the sport.

"We hope many people in Sunderland, including the families and friends of the school children here today, will take up the opportunity to be part of the event later this summer and other parts of the swim, bike, run offer we will be developing across Sunderland in the future."

The Super Series event over the weekend of 20 and 21 August will bring together athletes from the British Triathlon Youth & Junior, Senior and ParatriSuper Series' for an action-packed weekend of racing, including the British and Inter Regional Championships and a Great Britain Age-Group Team qualifier.

There will be something for everyone to get involved with across the weekend, whether that's completing their own swim, bike, run activity, volunteering at the event or watching the action unfold around the seafront in Roker.

Families and adult participants can join in all the fun and excitement of the weekend by signing up to a swim-run for families and a swim, bike, run for individuals wanting to dip their toes into the world of triathlon by either taking part on their own or alongside family and friends.