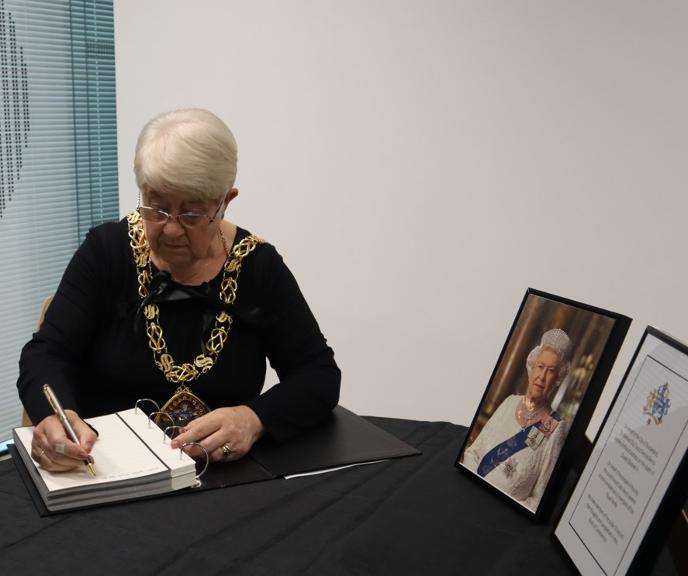 People in Sunderland are being given the chance to pay their own personal tributes to Her Majesty The Queen following her sad death yesterday.

Books of condolence have been opened at City Hall, Sunderland Museum and Winter Gardens, Washington Town Centre Library, The Hetton Centre and Houghton Library and Sunderland Minster will be available for people to sign during each venue's standard opening hours.

The Mayor of Sunderland, Councillor Alison Smith led the city's tributes to her Majesty The Queen by signing the book of condolence at City Hall this morning.

Speaking as the Union Flags were flying half mast at City Hall, Hylton Castle and The Port of Sunderland, she said: "I know lots of people will have their own fond memories of her Majesty The Queen and will want to leave their own personal tributes to her. It was a great honour for me as the Mayor of Sunderland to be able to pay tribute to Her Majesty on behalf of the people of this city.

"During her long reign, Her Majesty touched the lives of so many people in so many inspirational ways. Her death is a tremendous loss which has been felt throughout the world. I know that the thoughts of people across our city are with the Royal Family at this very sad time."

Anyone wishing to lay flowers as a mark of respect to Her Majesty can do so in an area round the bandstand at Mowbray Park in Sunderland city centre. Please note this is for flowers only. Flowers will remain in place until the day after the mourning period. Flowers will be checked daily and any wilting and dead flowers removed.

A vigil is also being held at Sunderland Minster at 7pm tonight ( Friday 9 September) for those wishing to pay their respects.

Her Majesty The Queen and His Royal Highness The Duke of Edinburgh visited Sunderland a number of times during her 70 year reign.

Previous visits to the city include:

Further updates will follow as more information becomes available over the next few days.