Sunderland pays tribute to Her Majesty The Queen

People in Sunderland have been paying tribute to Her Majesty The Queen following her death on Thursday 8 September. 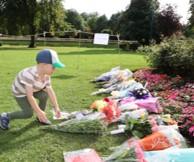 Residents have been visiting Mowbray Park in the city centre to lay flowers as a mark of respect to Her Majesty. People are invited to lay flowers at an area around the bandstand.

One of the people who left flowers at the bandstand was four-year-old Jude Harrison, who came to pay respects with his grandmother, Pauline King.

Pauline, from Tunstall, said: "We had been to the Proclamation at Sunderland Minster as a family and felt we wanted to go and lay some flowers in the park. We're witnessing a part of history and thought it was a good thing for Jude to be part of.

"We have talked to him about The Queen and how long she had been on the throne. He said it was very sad, but he was happy to come and lay some flowers for her.

"We're really glad we did it because The Queen was an incredible lady who did a lot for the country and she will be a big miss."

The Mayor of Sunderland, Councillor Alison Smith, said: "During her 70-year reign Her Majesty The Queen touched the lives of so many people, young and old, and we have seen lots of people across Sunderland pay their own tributes to her.

"Many people in the city have fond memories of The Queen and want to pay their respects publicly, which they are invited to do through signing one of the books of condolence or laying flowers."

Anyone who wishes to lay flowers is welcome to bring floral tributes to the bandstand at Mowbray Park. Flowers will remain in place until the day after the mourning period.

Please note this is for flowers only. Flowers will be checked daily and any that are wilting or dead will be removed.

Residents can also pay personal tributes by signing one of the books of condolence that have been opened at City Hall, Sunderland Museum and Winter Gardens, Washington Town Centre Library, The Hetton Centre and Houghton Library and Sunderland Minster.

They are available for people to sign during each venue's standard opening hours.

People can also pay their respects on the online book of condolence at www.royal.gov.uk